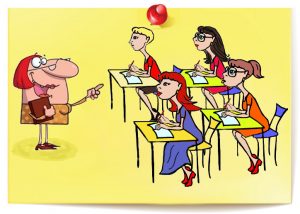 Learning English as a foreign language has become a necessity in almost all non-English speaking countries in the last 2 decades or longer. Yet, many people find this learning process stressful and difficult due to many factors.

An inevitable question arose in my personal contact with future learners of English who come to our school for entry test: How is it possible that after 10 or 12 years of learning a foreign language in schools and at universities students come to a language school and start learning from the very beginning?What could cause this fright of learning – lack of motivation, age, sex, type of intelligence, kind of school, strict teachers…? The answer probably lies in all these components.

An overwhelming majority of candidates come to the assessment test with strong fear of making mistakes when producing written and especially spoken English. When asked what causes this dread, many of them complain about terribly strict teachers who forced them to learn too much grammar which they cannot use on their own. Students often ask me questions like this: ‘When are we going to do reported speech?’ or: ‘How long will it be before we learn the conditionals? How about the passive?’ Sentences that follow are not scarce: ‘I know the grammar quite well but I can’t speak.’ ‘I understand everything you say in English but I don’t know how to express myself.’

From these typical remarks and questions it is obvious that pupils and students in state schools, colleges and universities learn mostly about rarely used grammatical rules and are almost completely unable to exploit many of them themselves. If you ask them to tell you irregular verb forms of the past tense and the past participle, they will recite them without any problems. However, if you ask them to use these in sentences, they immediately get confused and usually make a mistake, often commenting that they have no idea what these ‘three columns’ (the infinitive, the past and the past participle) are all about. Therefore, teachers in language schools try to give learners more practice in speaking and make them become aware of the usage of those grammar sections that students have already learned and particularly the ones they will most likely need in everyday communication.

Another important point is number of students in a class. All of the applicants ask how many students there are in each class in a language school. As soon they hear that there are not more than eight, they nod and smile with a relief. More and more are demanding to be in a group of two people or even want the teacher just for themselves.

It is common sense that state schools cannot have classes with less than 15 students and very frequently there are as many as 30-35. In such environment it is impossible to give all students the necessary attention and opportunity to speak, read or ask questions. A perfect number of students in any class, according to some, is 12. This magical number is extremely easy to manipulate in many ways – teacher can divide such class into pairs, into small groups of 3-4, larger groups of 6 or even combine pair and group work by splitting them and gathering them again in order to mingle the students, enabling them to share more information and interact with many more individuals than in extra large classes, and accordingly giving them plenty of speaking, listening, reading and writing activities as well as the grammatical ones. Apart from that, frontal concept of teaching and learning, typical for high schools, colleges and universities, is reduced and because of this students feel more confident and are not afraid of the teacher hearing every inaccuracy they produce.

Finally, motivation is probably one of the most significant aspects of any kind of learning. With no motivation learning process is simply a range of memorizing facts with short-term effects. Young children are far more motivated to gain knowledge than teenage ones and often do better at school at a younger age than when they enter puberty, most probably because of their constant desire to find out about new things around themselves as well as the competitiveness that a lot of them possess. It is no secret what hormones do to rebellious youngsters from the age of 13 to 18 and what typical behavior they present in front of their parents and teachers. So, all the knowledge they have is actually the one gained in lower classes of primary school. Young adolescents, however, have other reasons for not being interested in language learning. Many start studying in a specific area so foreign language becomes only a tool which can be developed later, they become real adults, need more independence in every aspect of life and it appears that they don’t have enough time for developing their linguistic abilities. On the other hand, some of the students decide to improve their language skills in private language schools mostly because of the exams that are obligatory in their academic curriculum.

Quite contrary to teenagers and very young adults, grown up people, mostly employed in international companies, see an opportunity of advancing in their career with a better command of English language. This aspect is more than enough for reaching a decision to start learning or to activate passive knowledge of English.

The above mentioned familiarity with the foreign language, which exists in the form of an unsolved puzzle, needs to be pieced together, apparently only at a later age, in a private language school, when an ex pupil finally makes up his mind to go back to the classroom again and ‘learn that English once and for all’.