After a time, Once upon a time, in a small beautiful village lived a beautiful girl. She was called Mara.

Like other girls, she led cows to pasture. Girls also spun wool. On meadow was a deep pit. One day an old man, who walked around, told them: “If some of you spindles falls in the pit, her mother will become a cow.” Girls smiled and brought closer to the pit. One day Mara’s spindle fell into the pit. When she returned home her mother had become cow. 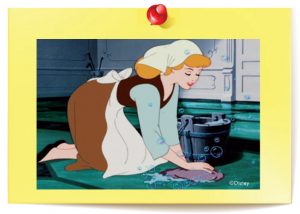 With other cows, Mara led her to pasture. Mara’s father married. His wife has a daughter. She was ugly, evil and jealous on Mara’s beauty. She and her mother hated Mara. They didn’t permit her to buy new things, to have a shower. After a time ash covered Mara’s clothes and they gave her a nickname Cinderella.

Stepmother and her daughter gave Mara difficult things to do. One day Mara’s stepmother gave to Mara a huge heap of wool to spin. Mara had to do that for this day. She went to meadow and she spun wool. On the end of day she saw that a heap was huge yet. She started to cry. Cow, who was her mother, came and asked her why she was crying. Mara told that she didn’t dare to return home because she couldn’t spin wool. After those words, cow started to chew wool and thread appeared from her ear. Mara wound up thread in a spool. She was happy and returned to home. Stepmother was surprised and she didn’t say anything. Next day she gave Mara more wool to spin than the day before. Mara and her mother did same that the day before and Mara again was successful. Third day Mara’s stepmother followed Mara and saw how she spin wool.

Next few days, Mara’s stepmother required from Mara’s father to kill a cow who was Mara’s mother. He said that he would do that. Mara heard that and she cried for whole day. She told her mother what her ex husband would go to do.  Mara’s mother told: “Don’t worry. If they kill me, you won’t eat my meat. You have to collect my bones and bury under two stones behind home.” Next day Mara’s father killed cow. Mara didn’t eat meat. She buried mother’s bones under the stones. When she had difficult time she went to that place and found help.

After few months, one Sunday, prince came to a village church on liturgy. He was handsome and looked for a wife. Mara’s stepmother and her daughter made a mess in the house, threw millet around the house and went to the church. Mara’s missions were cleaning the house, picking millet and preparing lunch. After she did that she could go to church. When she stayed only, she went to mother’s tomb. On tomb were box with dresses and two white pigeons. Pigeons told her that they would to do everything. She wore a silk dress and went to the church. She was the most beautiful girl in the church. Prince saw her and fell in love. Before liturgy ended she left home. When she came home she changed dress and sat on her place. Stepmother and her daughter came home and asked who the girl was. They were surprised because house was cleaned, millet was picked and lunch was prepared.

Next Sunday prince again came to church. Mara’s stepmother made bigger mass and brought more millet then a week ago. She gave to Mara same mission and went to church. Mara again went to the mother’s tomb. She wore a silver dress and went to the church. All people watched her. When she left for home, prince followed her. But she disappeared. She came home and changed dress. Stepmother and her daughter were furious because prince fell in love with other girl. They were surprised again because Mara did all. Mara smiled and did her work.

Third Sunday, same story repeated again. But this time Mara lost a gold slipper. Prince found slipper and told that he would to marry a girl whose slipper was.

Every girl in the country tried a slipper. But someone of them slipper was small, someone was huge. Finally, prince came to Mara’s house. Stepmother told that her daughter was only girl in the house. Slipper was too small for her foot. Prince saw the other slipper under a trough. He lifted the trough and saw Mara in gold dress with one slipper. He put on her foot other slipper and took her in his castle.

He married her and they lived happily ever after.